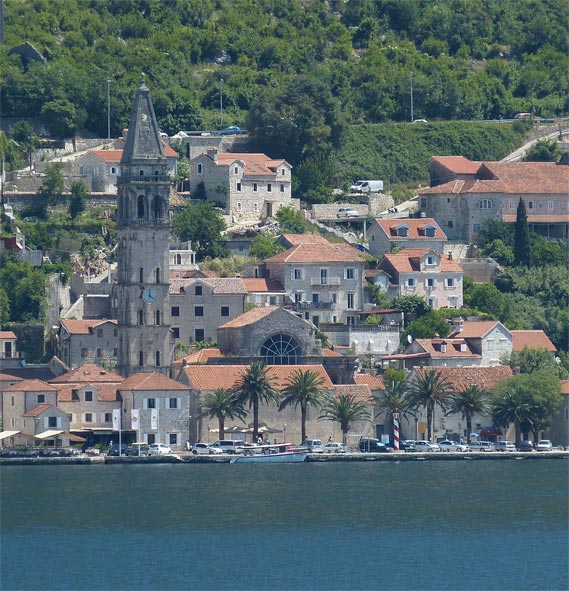 Perast (Montenegrin and Serbian Cyrillic: Пераст, pronounced [pɛ̌rast],[1] Italian: Perasto) is an old town on the Bay of Kotor in Montenegro. It is situated a few kilometres northwest of Kotor and is noted for its proximity to the islets of St. George and Our Lady of the Rocks.

Perast lies beneath the hill of St. Ilija (873 m), on a cape that separates the Bay of Risano from that of Kotor, and overlooks the Verige strait, the narrowest part of the Bay of Kotor. The average yearly temperature in Perast is 18.3°C, and the number of sunny days is 240 (or around 2,500 sunny hours per year).

Near Perast there are two islets: one is called Sveti Đorđe (St. George) and the other Gospa od Škrpjela (Our Lady of the Rocks), and each has a picturesque chapel. Gospa od Škrpjela is particularly interesting given that it is the only artificially-built island in the Adriatic, with an area of 3,030 m² — it was built upon a rock (Škrpjel) after two Venetian sailors from Perast found a picture of the Virgin Mary on it in 1452.

Throughout the centuries, many empires battled for control of the city. In the 10th century, it was an autonomous city of the Byzantine Empire. From 1186 to 1371, it was a free city of medieval Serbia. It was, from 1420 and 1797 under Venetian Republic of Venice, and Hungarian control for brief periods, but as an independent republic from 1395 to 1420, when then returned to Venetian control once again. French occupation from 1807 to 1814 was followed by Austrian rule until 1918, when Kotor finally became part of Yugoslavia. The city sixteen Baroque palaces were mostly built in this period, as were its seventeen Catholic churches and two Orthodox churches. The old city does not have a defensive wall, but instead it has nine defensive towers, the most important of which is the tower of the Holy Cross. These were built by the navy of the Venetian Republic in the 15th and 16th centuries

The prominent Montenegrin Baroque poet and theologian Andrija Zmajević[2][3] (1628-1694) was a native of Perast. On 15 April 1654 an Ottoman force from Herzegovina under the leadership of Mehmed-pasa Rizvanbegović assaulted Perast; Andrija brother Krsto defended the city. Andrija wrote a poem "Boj peraški" (Battle of Perast) dedicated to celebrating this event. Some half a century ago the last remaining copy of this work was lost.

Perast was at its peak in the 18th century under the Venetian Republic, when it had as many as four active shipyards, a fleet of around one hundred ships, and 1,643 residents. The 1500 citizens of Perast were allowed to trade with large ships and to sell goods without tax on the Venetian market, which made them wealthy. As an example of the wealth of people from Perast, at the end of 18th century they managed to collect 50,000 Venetian gold coins (about 200 kg of gold) in order to pay the famous Venetian constructor Giuseppe Beati to build them the highest campanile (55 m) on the East-Adriatic coast. Near Perast are two small islands. St George with its small church from the 12th century and the artificial island "Gospa od Skrpjela" (in Venetian Madonna dello Scarpello) with a very interesting legend. From the reef whose top was 1 meter above the water surface, locals had been throwing rocks and sinking old shipwrecks for 200 years, thus creating a plateau of 3,030 square meters, upon which they then built a church.

At the end of 18th century, the town accumulated enough wealth that it managed to collect 50,000 gold coins (about 200 kg of gold) in order to pay the noted Venetian constructor Giuseppe Beati to build them the highest campanile (55m) on the eastern coast of the Adriatic. Right in front of Perast there are two small islands. The St George island with its small church from the 12th century and the artificial island Our Lady of Skrpjela with a legend surrounding it. On the reef whose top was 1 m above the surface of the water, people from Perast had been throwing rocks and sinking old shipwrecks for some two centuries, creating a plateau of 3,030 square meters upon which they built a church, which received donations for centuries and now it is a type of gallery and treasury of various objects. Beside 68 oil on canvas works by Tripo Cocolia (a 17th-century baroque painter from the eastern Mediterranean coast), on the church walls there are 2,500 golden and silver votive tablets which people from the Kotor Bay area donated to the church, in order to avoid various human disasters. Perast had the privilege to use the war-flag of the Venetian Navy in peacetime (called “LA FEDELISSIMA GONFALONIERA” by the local citizenry).

At the fall of the Serenissima (1797)[5] Perasto was the last city of the Republic to lower the Venetian flag. On 12 May 1797, the Republic of Venice ended, but a few places in the Albania Veneta for several months still continued to remain loyal to the Venetian Republic: Perasto was the last place of the Republic to surrender. On 22 August 1797 the Count Giuseppe Viscovich, Captain of Perasto lowered the Venetian flag of the Lion of Saint Mark pronouncing the farewell words in front of the crying people of the city and buried the "Gonfalon of Venice" under the altar of the main church of Perasto.

From 1941-43 during World War II, after Benito Mussolini had annexed the territories around Kotor to the Kingdom of Italy, Perasto returned under the influence of Venice and the area was part of the Italian Governorship of Dalmatia (it was called "Provincia di Cattaro"). After 1945, Perast was restored to Yugoslavia, and it is part of the Republic of Montenegro since 2006.