Cetinje was founded in 1482, when Ivan Crnojević moved his capital from Obod above the Crnojević River to deeper into the hills to a more easily defended location in a field at the foot of Mount Lovćen. He had his court built at the new location that year and also founded a monastery (dedicated to the Mother of Christ) as a personal endowment in 1484. His court and the monastery are the first recorded renessaince buildings in Montenegro. Crnojević was forced to move the seat of the Eparchy of Zeta from Vranjina to Cetinje due to the Ottoman invasions, in 1485.The town was named after the Cetina river.The bishopric of Zeta was elevated to a metropolitanate in Cetinje. It was later to play an important part in both the religious and national life. The Crnojević printing house, the first printing house in southeastern Europe, was active between 1493 and 1496 in Cetinje. Zeta was first put under Ottoman rule in 1499, then annexed by the Ottomans in 1514, organized into the Sanjak of Montenegro.

In the next two centuries, the development of Cetinje stagnated. It was very often subject to attack by Venice and the Ottomans. The city therefore endured many privations in the course of the 16th and 17th centuries. In this period the court and the monastery of the Crnojevići dynasty were destroyed. It was only at the end of the 17th century, in 1697, that Cetinje began to flourish again under the rule of the Petrović dynasty, refounded by Danilo Petrović.

Leading the wars of liberation and strengthening the unity in the country occupied Danilo and his successors, so they were unable to devote enough effort to the further development of Cetinje. It was only during the rule of Petar II Petrović Njegoš that far greater progress was made. In 1838 his new royal residence called Biljarda (Billiard house) was built. Cetinje was enlarged by building new houses that gradually led to genuine urbanization.

Many modern buildings designed for foreign consulates were built due to the newly established relations with various European countries. The buildings of the French, Russian, British, Italian and Austro-Hungarian consulates are regarded as the most beautiful of these.

Cetinje made great progress under the rule of Prince Nikola I Petrović when numerous public edifices were built. Those include the first hotel, called ‘Lokanda’, then the new Prince’s palace, the Girls’ Institute and the hospital. This period also saw the first tenancy houses. In the 1860 census Cetinje had 34 households. After initially holding off Ottoman incursions in 1852 and 1853, Cetinje was captured by Ottoman Omar Pasha's forces during the Montenegrin–Ottoman War of 1861–62. Ottoman rule over Montenegro did not last much more than a decade however, as 14 years later the "Great War", the third successive contest between the two nations, ended in Montenegrin victory, with most previously-Montenegrin territory returning to their control.

Montenegrin independence was recognized at the Congress of Berlin of 1878 and consequently Cetinje became the capital of a European country. Between 1878 and 1914 Cetinje flourished in every sense. Many renowned intellectuals from other South-Slavic parts came to stay there and made a contribution to the cultural, educational and every other aspect of life. Montenegro was proclaimed a kingdom in 1910. This had a great effect on Cetinje's development. At this time the Government House, the symbol of state power, was built. The population census from the same year recorded a massive growth in the world's smallest capital, registering 5,895 inhabitants.

In the Interwar period, Cetinje expanded its territory, as it was now a centre of the Zeta region. But when it was decided by the Parliament of Montenegro that the administrative organs should be located in Titograd (previously and presently Podgorica), Cetinje went through a harsh crisis. By building certain industrial sections and at the same time neglecting the development of the city's traditional and potential cultural and tourist capacities, the chance to create a strong basis for more solid prosperity was lost. 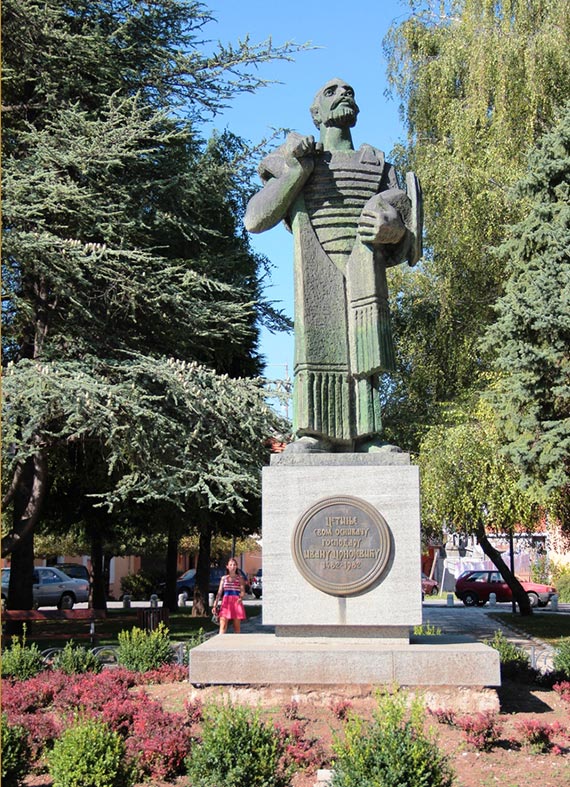 Cetinje is situated in the karst field (Cetinje field) of about 7km², with average height above sea level of 671m. It is 12 km (7 mi) of airline far from Adriatic Sea and 15 km (9 mi) from Skadar Lake. Now, it is on the main road Podgorica-Cetinje-Budva, which makes it open to the inside of Montenegro and Montenegrin coast.

Cetinje is well known by plentiful precipitations during spring and autumn, and it is one of the rainiest towns in Europe with about 4,000 mm (157 in) of water sediment on the yearly basis. Even beside enormous precipitations, Cetinje field and its surrounding do not have water flows on the surface and it has rare water sources. This is the consequence of karst configuration and geologic structure.

The onset and development of Cetinje, as a relatively young city, with its old historical core draws a lot of attention to urban and architectural heritage, on its construction and development influenced stormy historical, social and economic events in the country.

Cetinje, as a settlement has existed for 500 years, which is not much compared to the development of the coastal agglomeration of the ancient period in the immediate surrounding. However, these five centuries – the whole history of a people, who, through the development of city recorded moments of their origin, ascent, stagnation and downs.

For Cetinje as urban agglomeration, can be said to have formed suddenly, which makes it very specific. In fact, since the seventies of the nineteenth century, for almost fifty years, there was, in the urban context, designed and typological characteristic areas formed with urban type residential home ground floor and storey house with developed attic, created and developed in closed urban blocks, where line of life in them was street - house - garden.

Along with the development of this type of urban city blocks and residential buildings, has developed substantial public architecture of the city, which was built under the great influence of foreign builders with the application of various architectural styles and which then and now, is a representative architectural backbone of the city.

Between the two world wars, which characterized by the loss of Montenegrin statehood and noticeable stagnation of the architectural development of the city, Cetinje continues the tradition of formed, then already traditional type of urban residential houses and closed urban blocks, but they build the first modern multi-storey residential buildings for collective housing, and modern public institutions necessary for the then social life.

In the fastest and most important period of the development of Cetinje, since the seventies of the nineteenth century until the First World War, which was then the smallest European old capital, was created and developed city on the principles the European metropolises of that time in whose architectural activity of the city was engaged many foreign architects, engineers, builders and craftsmen.

The development of Cetinje in this period was followed by many important historical and social events. So the second half of the nineteenth century in the development of Cetinje marked period of state power and its pursuit of the European culture and international recognition. Recognition of Montenegro as an independent state, at the Berlin Congress in 1878., on the basis of which greatly expanded, he began a period of rapid creation of a national, economic, social, cultural, societal and spatial superstructure which caused increasing of economic power and the reorganization and improvement of the state apparatus and the authorities. During this period, Cetinje, as the old royal capital, gains in an even greater national and international significance and experiencing its rapid socio - economic, institutional, and urban development.

Without taking into consideration possibility and efforts which Cetinje is realized as spatially small and young city, it occupies an important place in terms of conceptual, social and urban transformation of other cities in Montenegro, particularly since the second half of the nineteenth century until the First World War.

On the basis of that and the facts about today's relatively preserved old urban heritage, is justified the fact which Cetinje ranks among the cities with significant architectural heritage.

Close to Cetinje (about 5 km (3.1 mi)) the Lipa cave (Lipska pecina) is situated, one of the biggest caves in the former Yugoslavia. Its entrance is located in the village of Lipa and it ends in the mountains directly over the Adriatic Sea. After project of Municipality of Cetinje and company 'Lipa Cave', the cave is restored and opened for public in July 2015. Today the cave is one of the biggest tourist attractions in Cetinje and Montenegro, similar to Postojna Cave in Slovenia.

The most impressive and very mystic destination of Cetinje, of the indescribable natural beauty, not only of Cetinje but also of Montenegro in general, is by all means the mausoleum of Petar II Petrović-Njegoš on the mountain Lovćen. The mausoleum is accessible by car from Cetinje, which is 13 km (8.1 mi) away.Apart from the beauty and the natural surrounding of beech, oak and linden tree forests, there is a unique freshness of Lovćen national park. The mausoleum is situated at the Jezerski vrh (Jezerski peak), in the height of 1,660 m (5,450 ft), and it officially represents the highest mausoleum in the world.

In the past few years there has been a plan of enlisting the old historic core of the city of Cetinje as a UNESCO world heritage site. With this, Cetinje hopes to rebuild and restore the old historic core and the façades of its buildings. Cetinje is becoming more and more popular with tourists so the locals started painting their houses in vivid colors, the local government started quite a number of projects to restore the buildings, the markets and façades of the city of Cetinje.